Looney Tunes: "A-Haunting We Will Go" 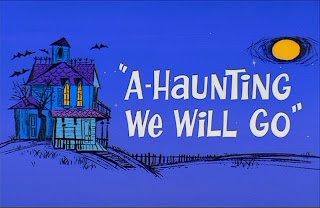 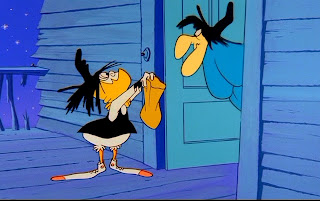 Daffy Duck's nephew (Mel Blanc) is out trick or treating.  He knocks on Witch Hazel's (June Foray) door.  Her appearance scares him and sends him running home to Uncle Daffy (Blanc).  Daffy says there's no such thing as a witch, telling his nephew "she's just a nice old lady trying to get along". 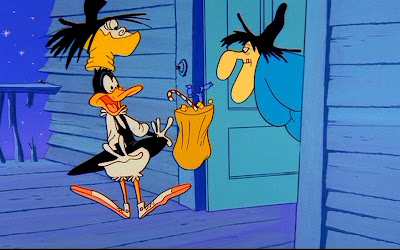 Daffy's nephew gets a scare.

Witch Hazel is frustrated with being a witch, she needs a vacation.  When Speedy Gonzales (Blanc) show up in a hole in her wall, asking to "borrow a cup of cheese", she gets an idea. 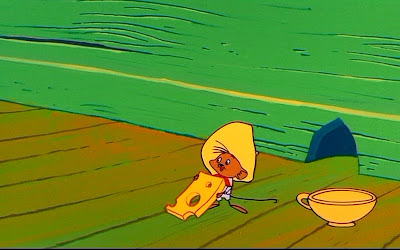 Witch Hazel feeds Speedy some poisoned cheese that turns him into a Witch Hazel lookalike! 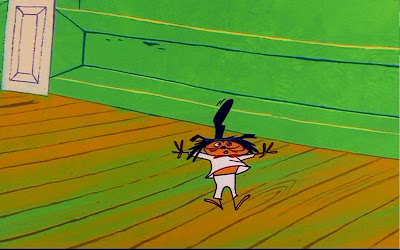 Speedy in mid-transformation
Despite his change in appearance, Speedy still acts like himself, running around, bouncing off walls.  She says Speedy can fill in for her, while she goes on a Hawaiian vacation. 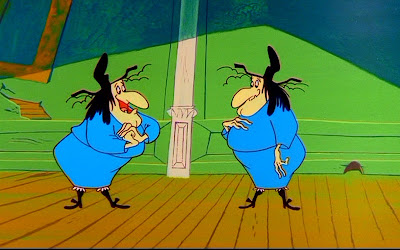 Witch Hazel turns Speedy into...Witch Hazel?
Daffy shows up looking for a witch and gets Speedy instead.  Speedy decides to have fun as a witch and makes up a potion for Daffy.  This turns Daffy into a bizarre looking flower-headed creature. 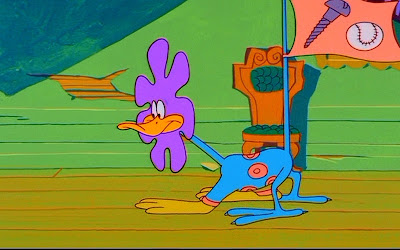 Witch Hazel returns from Hawaii, realizing it was a mistake to entrust Speedy to take over her role.  She turns him back into a mouse and Daffy back into a duck. 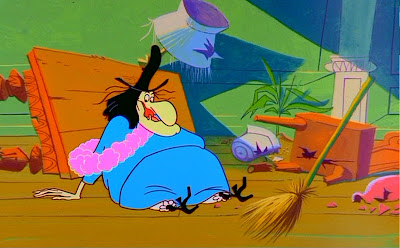 Witch Hazel suddenly gets an appetite for duck and  a mad chase ensues.

This short was produced near the end of the Looney Tunes series,  and it shows.  It's basically an inferior remake of Broom-Stick Bunny (which we reviewed here).  Much of the plot and gags are borrowed from that short.  Speedy even sings "A cup of tea, a cookie, and you-oooo", while preparing a potion for Daffy.  That's taken directly from Broom-Stick Bunny.  Daffy's transformation is lifted from the classic Duck Amuck short. 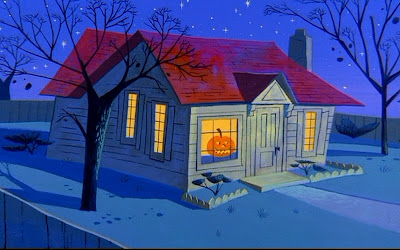 The plot is pretty weak here, and has one big hole.  Why does Witch Hazel need a replacement to fill in for her when she wants a vacation?  Why can't she just go to Hawaii when she feels like it?  She is a witch, after all. 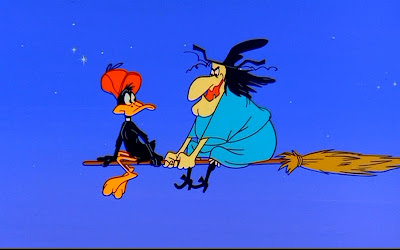 A-Haunting We Will Go was directed by Robert McKimson.  His work in animation dates back to 1920s (working for Walt Disney), and he helped shape the appearance of Bugs Bunny.  McKimson also created Foghorn Leghorn and Speedy Gonzales.  He directed dozens of classic Looney Tunes (including one of my favorites, the offbeat Rebel Rabbit),  but this isn't one of them. 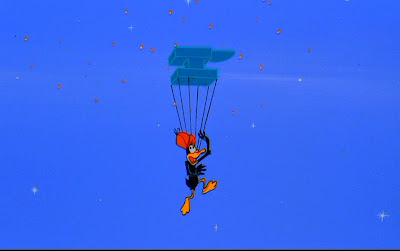 It does contain some nice visuals, plus, any cartoon that features Mel Blanc and June Foray together is worth watching at least once.  A-Haunting We Will Go can be found on dvd and Amazon streaming video.  But you're better off re-watching Broom-Stick Bunny.

My rating:
2 and a half Jack O'Lanterns.

vryoung I find your evaluation apt.

I was confused with witch hazel's word. what vacation did she mention. willden? will and? I am not english speaker & couldnt guess the word. thanks a lot.