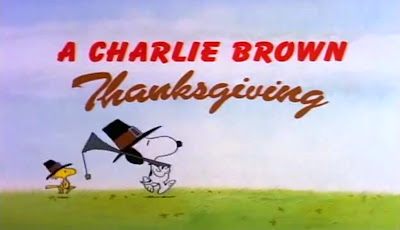 Charlie Brown: We've got ANOTHER holiday to worry about. It seems Thanksgiving Day is upon us.
Sally Brown: I haven't even finished eating all of my Halloween candy!

Marcie: Those early Pilgrims were thankful for what had happened to them, and we should be thankful, too. We should just be thankful for being together. I think that's what they mean by 'Thanksgiving,' Charlie Brown.

Linus van Pelt: This is not unlike another famous Thanksgiving episode. Do you remember the story of John Alden, and Priscilla Mullins, and Captain Miles Standish?
Patricia 'Peppermint Patty' Reichardt: This isn't like that one at all!

It's Thanksgiving, but Charlie Brown (Todd Barbee)  and his sister Sally (Hilary Momberger) aren't very happy about it.  Holidays always depress Charlie Brown and this one is no exception.    Sally frets over her homework assignment,she needs to write an essay about "Stanley Miles" (Chuck rightly guesses she means Miles Standish).

Linus Van Pelt (Stephen Shea) arrives arrives and talks about the importance of the occasion.  He reminds them that the United States was the first country in the world to make a national holiday to give thanks.

They discuss their Thanksgiving plans.  Charlie Brown says he, Sally and their parents will be visiting their grandmother for dinner.  Sally invites Linus to join them so they can hold hands under the table.

Charlie Brown gets a phone call from his friend Peppermint Patty (Christopher DeFaria).  She says her father has been called away, but he told her she could go over to Chuck's house for Thanksgiving. 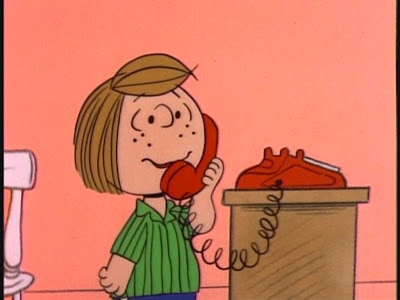 Peppermint Patty tells him "I don't mind inviting myself over because I know you kind of like me, Chuck"!
Charlie Brown is incapable of getting a word in edgewise, so he doesn't mention to Peppermint Patty that he won't be home for Thanksgiving dinner.  She calls back and says their friends Marcie (Jimmy Ahrens) and Franklin (Robin Reed) will be coming along with her. 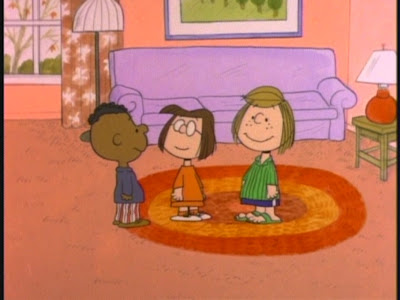 Charlie Brown doesn't know what to, he can't just call her back and cancel because "you can't explain anything to Peppermint Patty because you never get a chance to say anything!  I'm doomed!"

Linus suggests that he's not as doomed as he thinks and proposes a solution.  Charlie Brown doesn't have to be at his grandmother's house until 4:30, he can serve Thanksgiving dinner for his friends at his house earlier. He can't cook a turkey, so they decide to serve popcorn ,toast, jelly beans and pretzels.  Linus says he will help him and they enlist Snoopy and Woodstock (Bill Melendez, voicing both) to assist them.

Snoopy and Woodstock get a ping-pong table and chairs out of the garage and set them up in the backyard.  Snoopy also uses this time as an excuse to play some basketball.  All goes well, until Snoopy has trouble unfolding a chair.  This leads to a fight between Snoopy and the chair.


Peppermint Patty, Franklin and Marcy arrive and it's time for "dinner".  Snoopy serves food to everyone.  Linus says a prayer of thanks and tells a story about the first Thanksgiving.   But Peppermint Patty isn't happy.  She was expecting  turkey, cranberry sauce and pumpkin pie.

She tears into Charlie Brown over this, he feels bad and walks off dejected.

Can their Thanksgiving festivities be saved?

While it's not quite as good as its Halloween and Christmas counterparts, A Charlie Brown Thanksgiving is another Peanuts classic.  I've always loved Charlie Brown, Snoopy and Linus' version of a "Thanksgiving dinner".  It seems like the sort of thing real-life kids would do in that situation. 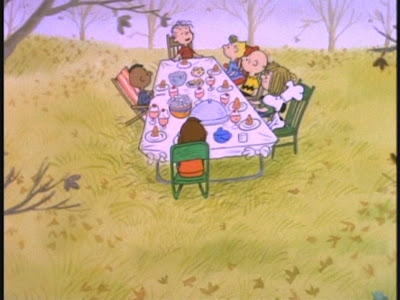 From what I've been able to determine (and I have a history degree!),  the Thanksgiving prayer Linus recites was made up for this special.  We don't know what Elder William Brewster said at the first Thanksgiving, but Linus' speech sounds like something one of the Pilgrims could have said.  It should also be noted that Brewster was spiritual leader, but not a minister, as Linus described him.

Vince Guaraldi wrote and sings the song "Little Birdie".  The song works as nice background music for the scene where Snoopy and Woodstock set up for the party. 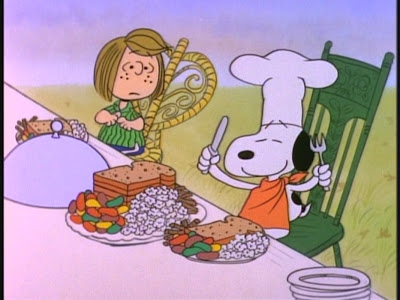 Charlie Brown's nemesis Lucy is noticeably absent from most of this special.  But she shows up long enough to pull the football away from Chuck in the cold opening.  I appreciate the way Charles Schultz  invented new ways for Lucy to trick Charlie Brown attempting to kick the football.

This is another holiday classic from Charles Schulz, Bill Melendez et al.    I remember watching this as a child and feeling a bit outraged on Charlie Brown's behalf when Peppermint Patty invites herself over to his house for Thanksgiving and then gets angry when she doesn't get the meal she expects.   (Methinks there is a life/etiquette lesson embedded in there somewhere!)     I also think it is amusing that it appears Snoopy was holding out on Charlie Brown since a more traditional Thanksgiving repast emerges from the doghouse late in the episode.

As a height-challenged person,  I've always had an affection for Woodstock and he has more to do in this episode than in his previous animated special appearance. (For those keeping score at home, 1972's You're Not Elected, Charlie Brown was the first "holiday" special to include Woodstock -- check out our review of that here.)   I love the interactions with Snoopy, particularly the arguing over wearing Pilgrim costumes. 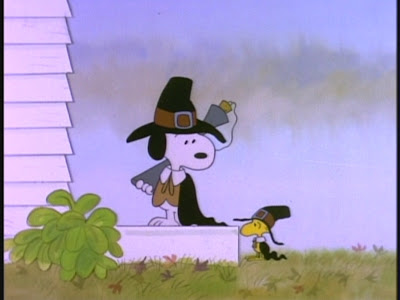 I also like really like Snoopy's epic battle with the lawn chair -  he even "play bows" to it at one point - showing he can act like a regular dog sometimes.

As a side note,  when I was very little (and when yellow was my favorite color),  my parents gave me a Woodstock beanbag toy that I loved very much.   In fact, although I did not know this at the time, I actually had more than one of these as the first one fell apart and was quietly replaced.    Here's a picture of a toy that is similar, if not exactly the same as my dear, departed Woodstock beanbag:

To return to the special,  I also like that the kids sing "Over The River And Through The Wood",  a Thanksgiving song I remember learning in elementary school, during the episode.  The kids' singing is cute and authentic sounding since the Peanuts specials always use actual children to do the character voices.

This is a special that I try to watch every year.    Fortunately,  it seems to still air on ABC every year and is also available via DVD/Blu-Ray, Netflix, Amazon video and others.   Maybe one day we'll even try to make Charlie Brown's unorthodox Thanksgiving meal ourselves!

I love your evaluation of this Charlie Brown special. Also, having had something to do with Melanie's Woodstock's reincarnation, I was amused to see your reference to him. Mom

What is the complete menu at Chez Ping Pong? Toast, jelly beans and popcorn, but there seems to be more. For instance, in the still with Linus at table, is that pudding or jello in goblets? Are there other foodstuffs as well?

I think it would be a great meal, perhaps something for adults bent on holiday drinking? The luxury of eating Thanksgiving dinner outside among some fallen leaves is a nice fantasy.

I'm pretty sure that's supposed to be ice cream in the goblets. Maybe the animators and the writers weren't exactly on the on the same page.

Looney Tunes: A Bear For Punishment 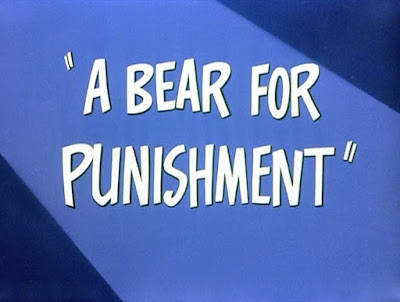