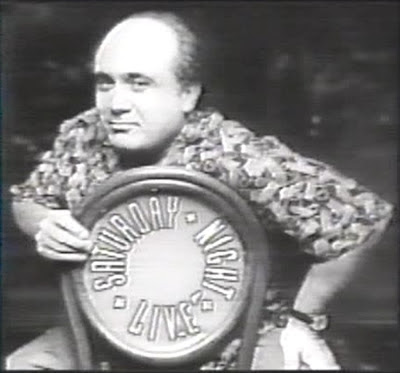 "Last Christmas...that was a doozy, wasn't it!  Those three ghosts coming to visit me, and me changing from mean and all happy and everything.  Boy, that was something!"
-Scrooge (Danny DeVito)

This is a bit of a change of pace for this blog.  This sketch came from an episode of SNL that featured no other Holiday-themed material, so I won't review the whole episode, or give it our traditional "candy canes" rating.  But I figured it was worth mentioning this sketch during Dickensfest 2012.

Back in 1988, I remember watching a sketch that featured Danny Devito playing Scrooge the year AFTER he was visited by three spirits who convinced him to change his ways.  This is something I'd thought about ever since I became aware of A Christmas Carol when I was a kid.  I recently sought it out to see if it was still funny 24 years later.

It's Christmas Eve, Ebenezer Scrooge is working hard, trying to get some things done before the Holiday.  He asks if his employee Bob Cratchit (Dana Carvey) can work late that night.  Cratchit says he was planning on leaving early, he expected Scrooge would allow him that the after the way he acted last year. 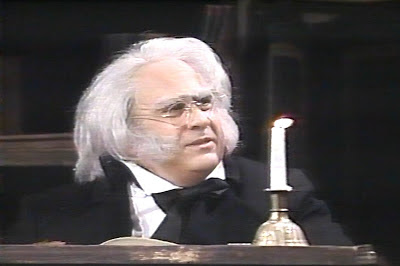 Scrooge relents and tells Cratchit it's okay to leave.  He gives Cratchit a chicken for Christmas Dinner and calls it a turkey.  Cratchit is a grateful, but a bit disappointed, since Scrooge gave him the "prize turkey" the year before. 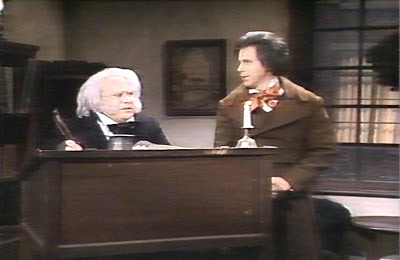 In the year since his transformation, Scrooge has "taken it in the pants" financially.   Cratchit hopes he hasn't lost the Christmas spirit.  Scrooge says he hasn't and tells Cratchit to go ahead and leave early.

We also learn that Scrooge has had to move Tiny Tim to a less expansive hospital.  Scrooge says the hospital was "coddling" Tim and he was never going to walk if he stayed there.

Scrooge's business is visited by Mary Whistlesnick (Victoria Jackson).  She's collecting alms for the Spendthrift Drunken Sailors Home.  Whistlesnick thanks Scrooge for his donation last Christmas and figures he can give more.  When he declines, Whistlesnick tells him a sob story, if Scrooge doesn't help, some sailors might have to face Christmas without getting drunk.  Scrooge loses it a bit, turns into his old self for a moment. He calls Christmas "a humbug!".  Scrooge catches himself, then decides to give 10 pounds to the Sailors Home.

Cratchit says Scrooge needs to learn to say no.  He invites Scrooge to come to his house for dinner, Scrooge declines, saying he has to much work to do.  He's suddenly visited by a familiar spirit:Marley's Ghost (Kevin Nealon) has returned.  He's worried that Scrooge is losing his Christmas Spirit.  Marley sends Scrooge off to dine with the Cratchits and offers to finishes Scrooge's work.  Scrooge complies and departs with Cratchit.

This sketch is not included in the version of this episode that streams on Netflix and isn't transcribed on the excellent SNL Transcripts site.  Which means it's a bit obscure even among SNL enthusiasts. 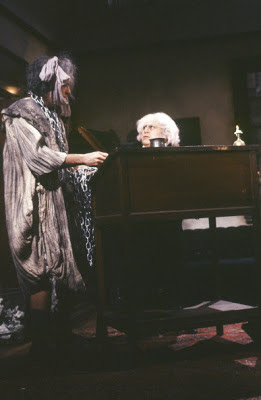 It's not the funniest SNL sketch ever, not even the best Scrooge parody.  But there aren't many sketches/films/episodes that deal with Scrooge's life after A Christmas Carol.  So if you're a hardcore Scroogeophile or Christmas episode fanatic (like you know I am!), "Bankrupt Scrooge" is worth seeking out.
Posted by J.A. Morris at 3:28 PM 2 comments: 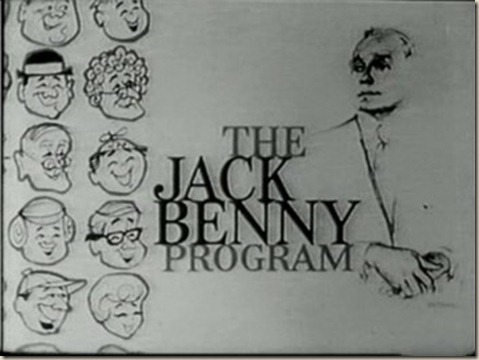 Jack Benny flashes back and tells the story of how he spent the last New Year's Eve:

Jack and his co-stars have just finished rehearsing. Show announcer Don Wilson has invited Benny's band and their wives to his house for a New Year's party.  Singer Dennis Day is wearing a "Baby New Year" costume and feels embarrassed about it.

Jack shows up backstage dressed up in a tailcoat and top hat, ready for a night on the town. Don invites Jack to the party, but Jack has a date that night with "Gloria". Don and the band are impressed when they hear Gloria's name mentioned.

Jack is called out of the room for a phone call from Gloria. Jack is heartbroken when she tells him something has come up and she has to cancel their date. Don walks by, Jack starts to ask him if he can come to his party, but Jack can't get a word in edgewise.

While the rest of the city makes merry with champagne and confetti, Jack wonders the streets in a depression, finally deciding to stop in a diner and have some soup. 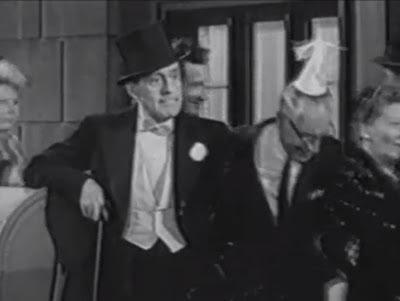 He insists on sitting at the bar. He is waited on by none other than Gloria (Shirley Mitchell). It turns out Gloria cancelled because she couldn't get out of work from the diner. Will Jack have to ring in the New Year by himself?

Plus, Dennis Day sings "An Irishman Will Steal Your Heart Away".

A very good episode. For those used to the typical Benny comedy routines (deadpan takes into the camera and jokes about him being cheap), "New Year's Eve" may surprise you. Benny spends most of this episode in "sad clown" mode, dejected by Gloria cancelling their date. I won't spoil the ending, but near the end of this episode, we get a touching moment between Jack and his trusted valet Rochester (Eddie Anderson).

While researching this episode, I learned that it's a remake of an earlier episode that aired on December 27,1953.  And that episode borrowed the plot from Benny's radio show.


Jack Benny's humor is a little dated, but fans of his show will like this episode. It makes for nice New Year viewing. I watched it on a dvd called The Christmas TV Episodes, but it seems to be available on other "public domain" dvds as well. 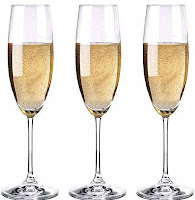 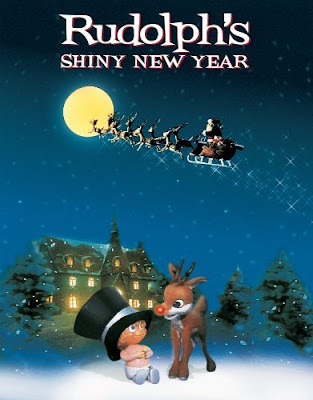 "You know Rudolph who guided and pulled Santa’s sleigh and who saved Christmas by lighting the way but there’s more to tell Rudolph saved the new year as well..." - Father Time

Rudolph (Billie Mae Richards) and Santa Claus (Paul Frees) arrive home at the North Pole after delivering toys on Christmas Eve. Santa has received a letter from his old friend Father Time (Red Skelton). Happy, the Baby New Year has disappeared. Santa explains that if Happy isn't found before Midnight on New Year's Eve, the New Year will never arrive, and the world will be stuck on December 31st forever. Since it still foggy out, Santa tells Rudolph is the only one who can save Happy and the New Year.  ""Rudolph with your nose so bright, you’ve 6 days left to set things right," says Santa!

With the guidance of General Ticker (Frees again), one of Father Time's foot soldiers, Rudolph embarks on his journey, through snow and ice and a desert called the Sands Of Time. They encounter a Camel named Quarter Past Five (Frank Gorshin), who offers them a ride across the desert.

They're suddenly attacked by a giant vulture named Aeon the Terrible (Frees yet again). His "aeon" is up and he will turn to snow and ice when the new year arrives. If Rudolph can't find Happy, Aeon will live on forever.
They escape Aeon and reach Father Time. He tells them Happy ran away because his ears were larger than average and caused people to laugh at him. Rudolph can relate, since his nose was also laughed at. Father Time says Happy can be found in the Archipelago of Last Years.

It contains island for every year, the "Baby New Years" of each year retire to the island and it remains that year forever.

Rudolph sets out for the Archipelago in a sail boat, only to be attacked by Aeon once more. He is rescued by a whale named Big Ben (Harold Peary) and they make their way to the islands.


Rudolph is eventually joined by a caveman named One Million BC (Morey Amsterdam),  a knight known as 1023 (Gorshin again) and even a Ben Franklin-ish fellow called 1776 on his journey. Aeon also continues his search for Happy and continues to divert Rudolph's search. Will Rudolph find Happy and get him back home before the New Year?

J.A. Morris says:
There's a lot going on in this special. The business about each past year having its own island and each year having a personification is either very imaginative or very convoluted (depending on your perspective). And it's not exactly a classic. But it's generally a fun ride. It's nice to hear Billie Mae Richards voice Rudolph again, and Paul Frees and Frank Gorshin are great in multiple roles.  Gorshin's exhortations as 1023 still make me (literally) laugh out loud.

This story here may not be as good as the 1964 Rudolph special, but the "animagic" is even better than the original. The new songs by Johnny Marks aren't as good as his classic Christmas songs, but they're enjoyable. The lyrics about the passage of time are very poignant, I appreciate them more in my 40s than when I first heard them.

There's an interesting bit of "traditional" animation that appears near the end.  Rudolph tells Happy his "origin" story and we get a new cartoon short that accompanies the "Rudolph" song. 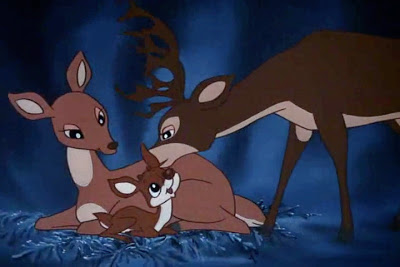 This special has sentimental value for me, as I can remember watching Rudolph's Shiny New Year when it was brand new. But I imagine children still enjoy it. It features a talking Sperm Whale and dinosaurs that sing and dance! How cool is that?!

My rating:
3 and half champagne flutes. 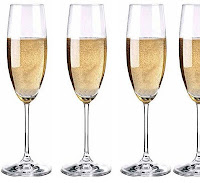 This is a fun special, although perhaps not required annual viewing.   As J.A. Morris says, there is an awful lot going on here -- perhaps too much, but it's still a fun journey.

I like the idea of the Archipelago of Last Years a lot and also quite enjoyed the creativity employed with bringing in fairy tales on 1023's island and the 4th of July on 1776's island (1976, the year this special first aired, was the U.S. bicentennial, after all).

There are a LOT of songs in this special, but most of them are not particularly memorable, which keeps me from rating it a "classic" like the 1964 Rankin Bass "Rudolph" special.   That being said,  "Have A Happy New Year" and "It's Raining Sunshine" are ear worms, despite being a bit fragmentary in nature.

I remember watching and enjoying this special when it aired on the Disney Channel in the 1980s.  I liked learning of Rudolph's further adventures, but it bothered me a bit that the young reindeer seemed to have been regressed age-wise.  (I guess the powers that be at Rankin-Bass decided a younger looking Rudolph was cuter?)

The supporting characters are all a lot of fun -  even ones in relatively minor roles.   I felt a bit sorry for Baby Bear not getting to hang out with his new friend for very long.
I also LOVE the dinosaurs that appear on One Million B.C.'s island especially a baby pterodactyl that Baby Happy encounters.