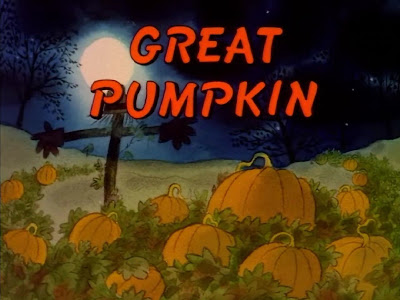 "On Halloween night the great pumpkin rises out of the pumpkin patch that he picked as the most sincere  then he flies through the air bringing toys to all the good children in the world."
-Linus Van Pelt 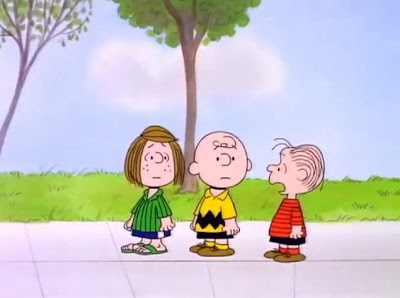 Peppermint Patty (Victoria Vargas) invites Charlie Brown (Brad Kesten) and Linus (Jeremy Schoenberg) to a bowling tournament on Halloween Night.
Charlie Brown accepts the invite, but says he's never bowled before.  Peppermint Patty agrees to teach him, but tells Chuck "I'll beat the pants off you!".
Linus declines.  He'll be spending Halloween in a pumpkin patch waiting for the arrival of the Great Pumpkin.  He asks Chuck and Peppermint Patty, they're not interested.  He literally drags Snoopy to join him in the pumpkin patch. 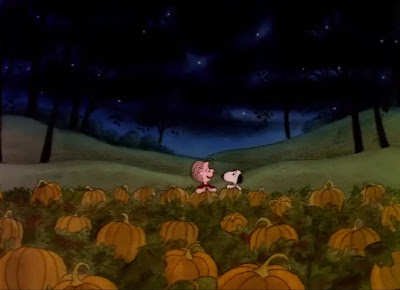 At the bowling alley, Charlie Brown does surprisingly well for a first time bowler. He bowls a strike on his first try!  Marcie (Michael Dockery) believes Chuck will actually win the tournament.  Peppermint Patty gets annoyed by this and is determined to win. 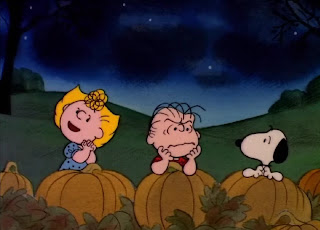 Sally shows up to wait for the Great Pumpkin, Linus isn't exactly thrilled to see her.
Back in the Pumpkin Patch, Sally (Stacy Ferguson) arrives looking for her "Sweet Baboo".  She has come to keep her "boyfriend" company.  Linus tells her he is NOT her boyfriend, but encourages Sally to stay and wait for the Great Pumpkin.  Sally reminds him that she's waited for the Great Pumpkin before and missed out on trick or treating for nothing.  She agrees to  stay, but says he BETTER show up or Linus will pay dearly if she wastes her time again.

Will the Great Pumpkin show up and bring toys for Linus, Snoopy and Sally?  Will Charlie Brown actually win something?  You'll have to watch the short to find out!

J.A. Morris says:
Most of us have seen It's Great Pumpkin, Charlie Brown multiple times.  But did you know about this "sequel" the classic Halloween special?
For those who never saw or heard of The Charlie Brown and Snoopy Show, it aired from Fall 1983 to Spring 1986 on CBS on Saturday mornings.  Each 30 minute episode contained 3 short cartoons. 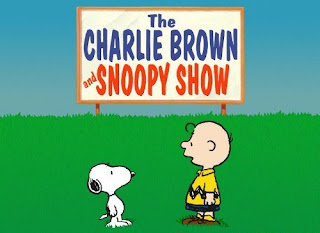 Most (if not all) of the plots were taken directly from the Peanuts comic strip.
I've been a Charlie Brown fanatic most of my life.  I watched the first season, but by the time season 2 rolled around, I was 14 and transitioning out of Saturday morning cartoons.  So I didn't know Great Pumpkin existed until a few years ago, when I found it on iTunes. 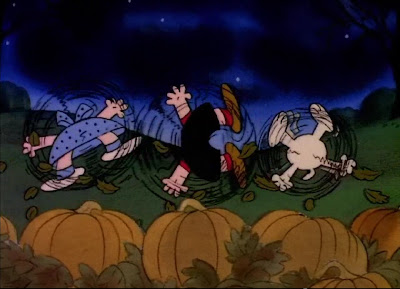 The Great Pumpkin arrives!  Or does he?

The animation looks good, as good as any of the classic Charlie Brown specials of the 60s & 70s.  But Great Pumpkin is a bit slight, even for a 7 minute short.  It's not bad, just not great either.  It works as a decent supplement to the classic special.

This episode was recently released on a dvd called Happiness Is Peanuts:Team Snoopy.  It's also available for streaming at Amazon and iTunes, look for it in episode 15. 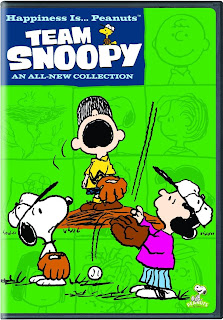 A note of trivia about this episode:Sally is voiced by a child actor named Stacy Ferguson, who later grew up to be Fergie of the Black Eyed Peas. 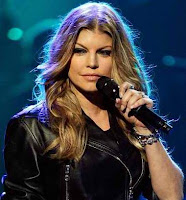 "Sally" today.
Great Pumpkin can't hold a candle to the original special, but it's worth seeing if you're a Peanuts completist.
My rating:
2 and 1/2 Jack O'Lanterns.

I generally agree with J.A. Morris's comments above.   The animation looks good, it's just too bad that this "kinda" sequel to It's The Great Pumpkin, Charlie Brown feels rather flat.   I'm taking a half a pumpkin away from my rating for lack of much Halloween-ish fun (other than the Great Pumpkin).