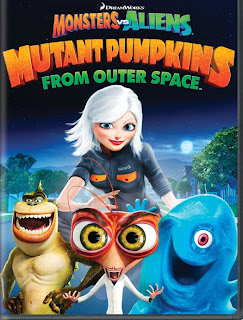 "This isn't just any night, it's OUR night, and when it finally comes we gots to terrify."
- The Missing Link

"Modesto? Why is it always Modesto?"
-Susan "Ginormica" Murphy

This TV special is a sequel to Dreamworks' feature length animated film, Monsters vs. Aliens, which was released in March 2009. 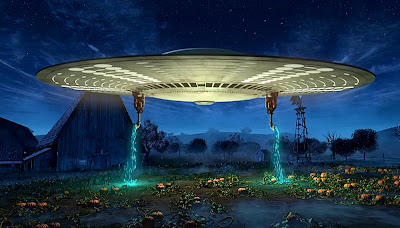 A flying saucer enters Earth's atmosphere and dumps green slime on a pumpkin patch.   Jeb (Peter Ramsey), the patch's owner, hears an odd noise and goes outside to investigate. Suddenly, he is attacked and wrapped in pumpkin stalks!  The next day, pumpkins are being given away at Jeb's farm. (Free for all "Humanz"!)   Dozens of families take them home to make jack o'lanterns. 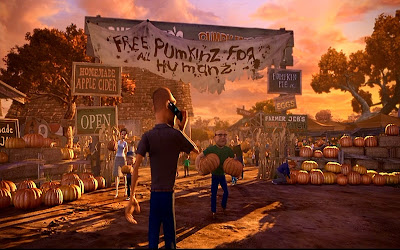 Our heroes, the monsters are now working as special ops agents for the U.S. government.  They are hanging out in their secret base and discussing Halloween.  The Missing Link (Will Arnett), B.O.B.* (Seth Rogen) and Insectasaurus are looking forward to the holiday and discussing what their costumes will be.  Link has missed Halloween for years (since he was cryogenically frozen).  He's excited about participating, saying that as they are monsters, Halloween is their night, and he can't wait to go out and scare people.  Dr. Cockroach, Ph.D. (Hugh Laurie) isn't so enthusiastic about the occasion and feels that "All Hallows Eve is more trick than treat."  His disillusionment stems from when he was a little boy and was beaten up by a gang of bullies on Halloween night. They took all his candy including his swirly pop!  Ever since then, he has avoided celebrating Halloween.  Susan a.k.a. "Ginormica" (Reese Witherspoon) returns from a false alarm call involving a yeti and joins in the discussion,  her zombie cheerleader costume idea doesn't impress Link, but Susan thinks they should all get out and have some fun.

Their boss, General W.R. Monger (Kiefer Sutherland) shows up and tells them a UFO has been sighted near Modesto, Susan's hometown.  The gang are ready for action.   Monger tells them to be quiet about it, and just act like they're in town to celebrate Halloween with Susan's parents.


We cut to Modesto where Susan's parents, Wendy (Julie White) and Carl Murphy (Jeffrey Tambor) are decorating their house for Halloween.  Their home looks like a Halloween card come to life - they are just about ready for their big Halloween party!

Susan and the others arrive, and rather unconvincingly try to stick to their "cover story" of just being in town for Halloween.   Dr. Cockroach produces a threatening looking ray gun and scans Susan's parents (and assorted trick-or-treaters) to make sure they are actually human and not aliens. Susan claims she "finally managed to get a night off."   Her parents joke that they thought Modesto would have to be invaded by aliens again for them to get to see her.   Susan says that's ... just ... ridiculous!   (Oops!)


The gang decides to split up to cover ground more effectively and maybe do a bit of trick or treating in the process.


Dr. Cockroach tries to explain the nuances of trick-or-treating to B.O.B., who is a little slow on the uptake, but definitely on board with the idea of free candy.   B.O.B. forgets what he's supposed to say at the first house and stares blankly at a little old lady who opens the door.   Dr. Cockroach intervenes -  the old lady is impressed by his "costume" -- "it's really quite disgusting," she says.  She gives Cockroach ... a Swirly Pop!  Suddenly,  Dr. Cockroach is filled with childlike enthusiasm for Halloween and he and B.O.B. embark on a full-fledged quest for CANDY!

Link wants to make up for lost time, he attempts to "scare the caramel"out of the neighborhood children.  He fails miserably -- people repeatedly mistake him for Shrek and Kermit the Frog.


We cut to the home of one of the families who picked up a free pumpkin at Farmer Jeb's pumpkin patch earlier in the day.  They are preparing to carve their jack o'lantern -- their little boy suggests they name it "Wicked Jack".   Suddenly, the pumpkin comes to life, sprouts arms and legs and terrorizes the family!  Wicked Jack (Rainn Wilson)  then proceeds outside and rallies other, smaller pumpkins to join it in attacking the neighborhood.


Wicked Jack grows into a giant and steals candy from children while fighting our hero monsters.  The monsters realize that the pumpkins gets bigger with every bite of candy they consume (don't we all?).  Eventually, the mutant pumpkins coalesce into one HUGE organism and gravitate towards the biggest supply of candy in Modesto: The Murphy house!    Chaos reigns! 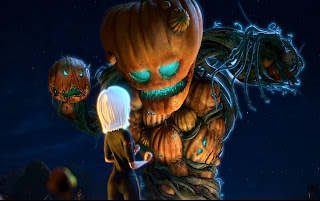 Can the combined might of Susan,The Missing Link, B.O.B., Dr. Cockroach and Insectasaurus defeat the mutant pumpkins?  You'll have to watch and see!

* B.O.B., if you're interested,  stands for "Benzoate Ostylezene Bicarbonate", which basically translates to  "indestructible blob of goo".

I'd say this is at least as good as the original Monsters Vs. Aliens movie.  And putting the "Monsters" in a Halloween special was a no-brainer.  They're all likeable characters and the voice actors are perfect in their roles.  Jeffrey Tambor and Julie White are also excellent as Susan's Halloween-crazed parents.

Though it's aimed at kids, there are plenty of jokes and references to horror (and non-horror) movies that only adults will get.  Here are a few examples:
-A cell phone plays John Carpenter's theme from Halloween.
-Gen. Monger says that he loves "the smell of mutant pumpkin guts in the evening.  It smells like victory.", an obvious homage to Apocalypse Now.
-The theme music from Psycho pops up on the soundtrack.
-One of the Murphys' yard decorations is based on Children Of The Corn.
-And in the image below, Dr. Cockroach resembles a certain Extra Terrestrial. 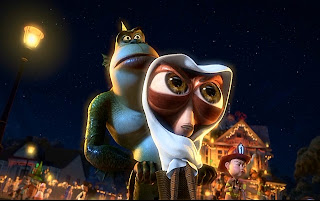 The plot itself, involving mutant pumpkins is reminiscent of many sci-fi films of the 1950s.

We also get a nice combination of comedy and action.  Cockroach, Link and B.O.B. provide most of the laughs, but the battle scene at the end against Wicked Jack is exciting (even if we don't expect the Mutant Pumpkins to win). 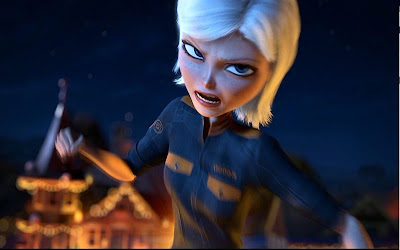 "No one ruins a Murphy Halloween!"
I am hardly the demographic for Mutant Pumpkins from Outer Space, but I've enjoyed watching it every Halloween since its premiere.  Time will tell if it will ever be considered a "classic", but it's a lot of fun.
My rating:
3 and 1/2 jack o'lanterns.

I generally agree with what J.A. Morris had to say about this special - it's definitely fun Halloween viewing that works whether or not you've seen the Monsters vs. Aliens feature film, I think.  There are things to enjoy for viewers of all ages.   The characters are charming in their sit-com-esque quirkiness.  I loved the Murphys' over-the-top Halloween yard displays and the affection for B-movies as well as Halloween in general that is evident throughout.   I do wonder whether there may be a few too many pop cultural references to make this a "classic" in years to come, but as J.A. Morris points out, only time will tell on that score.