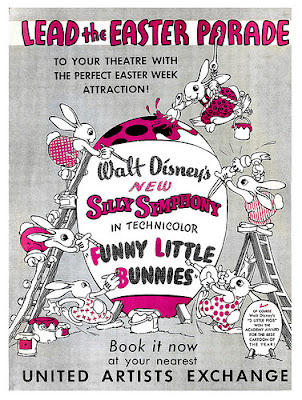 "The storybooks say that far, far away,
There's a green enchanted dell.
Where the rainbow ends and everything is gay,
And the Easter Bunnies dwell." 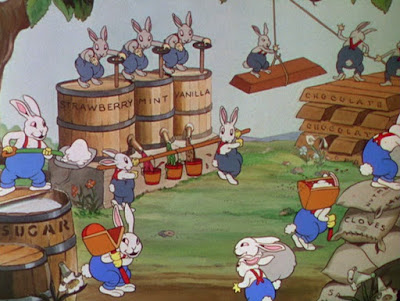 Beyond the rainbows, a veritable army of bunnies decorates Easter Eggs and Easter candy in an assembly line fashion so they're ready to be delivered by the Easter Bunny.  Like Santa's elves, the bunnies decorate all year round.  They're assisted by a flock of hens who lay eggs that rabbits decorate with every color of dye imaginable.

Some bunnies serve as models for chocolate bunny sculptures.

And, of course,  the bunnies make and fill Easter baskets. 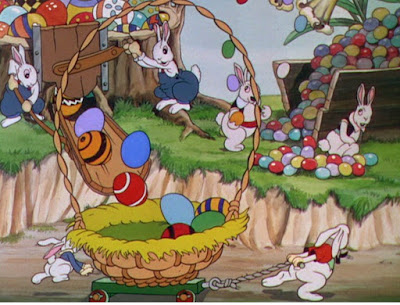 J.A. Morris says:
The summary is short because, that's basically what happens.  Like a lot of early animated shorts, Funny Little Bunnies exists so that animators can show the audience "look what we can do!" 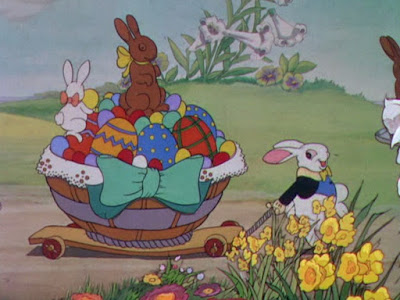 It has lots of beautiful animation and cute animals and entertaining ways to show us how Easter candy is made and how Easter Eggs are colored. 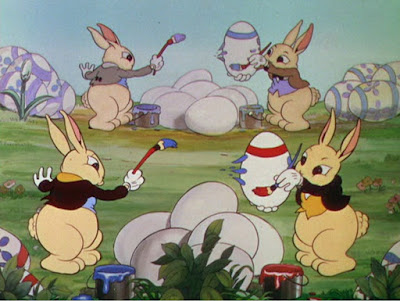 There is one not-very-pleasant aspect of this short we should point out.  At the 1:37 mark, a bunny falls into a vat of chocolate and emerges looking like an ugly racial stereotype.  It's a product of its time and I won't hold it to today's standards.  That doesn't make it okay.  It's probably over the heads of younger views today, but if you watch it with a kid, be prepared to answer questions. 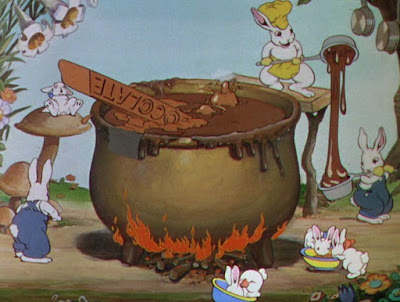 This cartoon can be found on a DVD called Walt Disney Treasures: Silly Symphonies.  It's currently out of print, but it can be purchased online and is also available at many libraries. 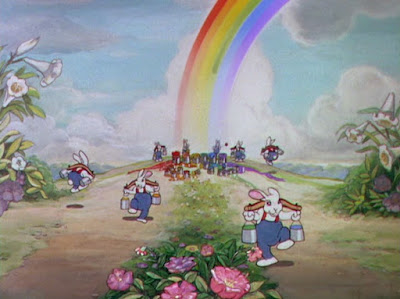 Funny Little Bunnies is a generally nice short cartoon and a decent addition to the somewhat limited Easter TV and film offerings.  But the racially insensitive bit and the lack of a real story prevent me from giving it a higher rating. 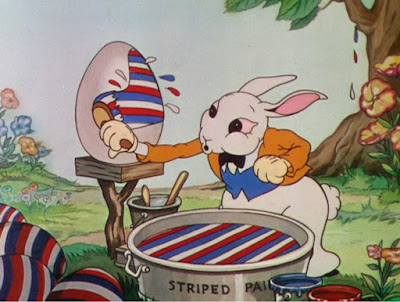 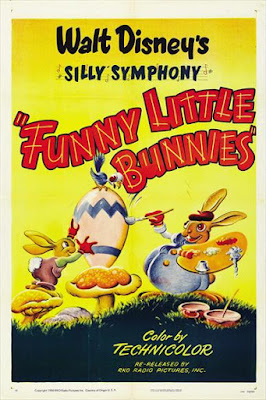 This is a slight, but generally enjoyable Easter short cartoon.   As J.A. Morris says above,  the animation is beautiful,  but there is some unfortunate racial and disability stereotyping that, while common in the time period,  doesn't sit well today.

Disney's Silly Symphonies series was a chance for the studio's animators to flex their artistic muscles and develop the art of animation.   The series in general was notable for its use of the Technicolor process, the inclusion of primarily musical soundtracks and experimentation that was a lead up to the eventual production of animated feature films like Snow White & the Seven Dwarfs.

I appreciated the creativity of some of the bunnies' candy production processes - getting dye colors from a rainbow was a nice touch.

Overall, Funny Little Bunnies is a cute short.  It is a solid entry in the Silly Symphonies series and is worth a look seeing as there are not very many animated Easter options out there.

2 and a half Easter Eggs.

The Simpsons: "Homer vs. The Eighteenth Amendment" 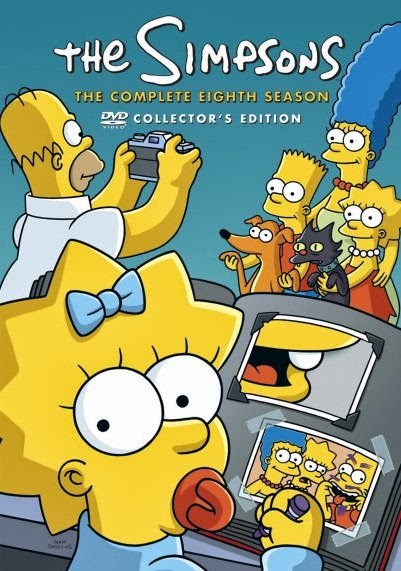 "Oooh, it's been St. Patrick's Day for hours and I'm still not drunk yet!"
-Homer Simpson

It's St. Patrick's Day in Springfield. 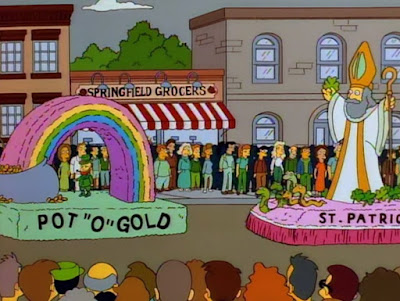 Marge Simpson takes her kids Bart, Lisa and Maggie to the annual St. Patrick's Day parade.  Bart sees a man selling plastic horns and asks for one.  Marge is reluctant, reminding that Bart that he's gotten similar horns in the past and thrown them away before he got home.  She buys him a horn anyway. 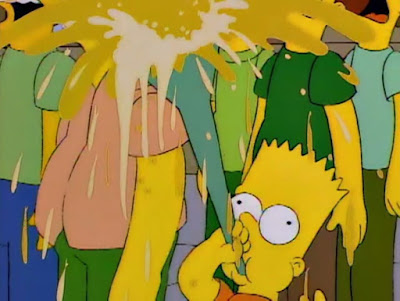 At the same time, parade devolves into a drunken brawl.  The Duff Beer float shoots beer into the crowd with cannons.  Bart just happens to to be blowing his new horn near the Duff float so beer goes directly into the horn (turning it into a beer bong!) and Bart swallows enough to get quite intoxicated. 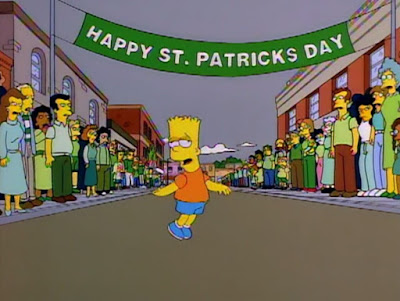 Bart's drunkenness is captured on camera and airs on the local evening newscast.  The citizens of Springfield are enraged and some even call for banning alcohol.  At City Hall, a clerk discovers that Springfield passed a prohibition law a century earlier and the law is still on the books!  Alcohol becomes contraband in Springfield! 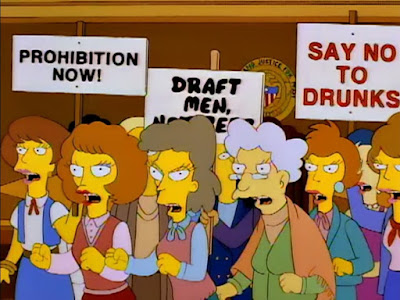 In order to enforce this law, the city brings in a lawman named Rex Banner.  He arrives and takes over, dismissing the ineffective police Chief Wiggum.  The chief is crushed. 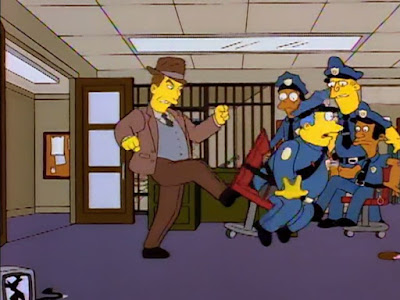 The prohibition law gives Homer Simpson an idea.  He visits the dump and collects Duff's discarded barrels of beer, which still contain alcohol.  He takes the beer and conceals it in bowling balls as part of an elaborate alcohol distribution scheme. 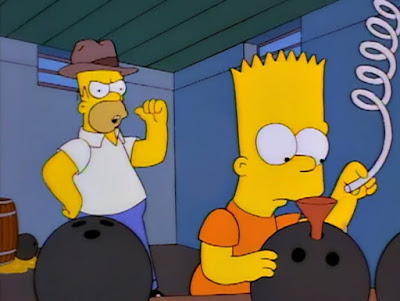 Homer sells beers to Moe and others and makes lots of money in the process.  The press learns of this, but Homer's identity remains a mystery.  He is branded "The Beer Baron."  Rex Banner is aware of his existence and is determined to bring the Beer Baron to justice.

J.A. Morris says:
As we've said here before, there aren't many St. Patrick's Day specials, episodes or movies, so this Simpsons episode is an nice addition. 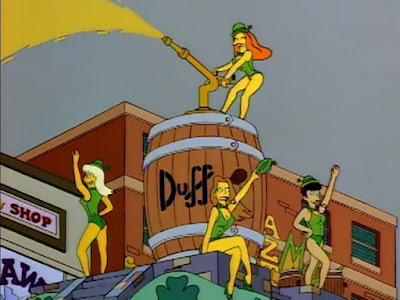 Like most episodes of The Simpsons, "Homer vs. The Eighteenth Amendment" begins with a story that is dropped by the end of the first act.  The St. Patrick's Day portion of the episode ends at the 6-minute mark.  But the holiday serves as the fulcrum that sets the prohibition storyline in motion. 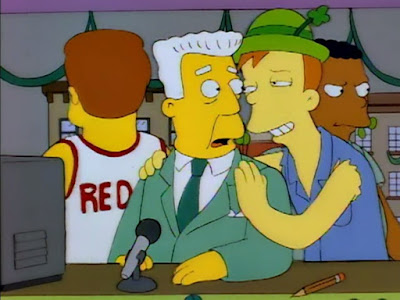 "Homer vs. The Eighteenth Amendment" is an homage to classic gangster movies and the TV show The Untouchables.  I've long been a fan of Dave Thomas, best remembered as Bob McKenzie on SCTV.  He does a great job voicing Rex Banner. 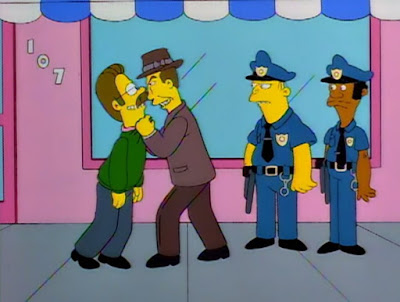 Dan Castellaneta is great as usual voicing Homer, who gets most of the good lines of the episode.  In fact, the end of "Homer vs. The Eighteenth Amendment" features one of Homer's best quotes of all time.  Sorry, but you'll have to watch to find out what it is.

In addition to the St. Paddy's parade and the prohibition plot, "Homer vs. The Eighteenth Amendment" opens with Lisa and Bart going to school on St. Patrick's Day, with Bart failing to wear green. 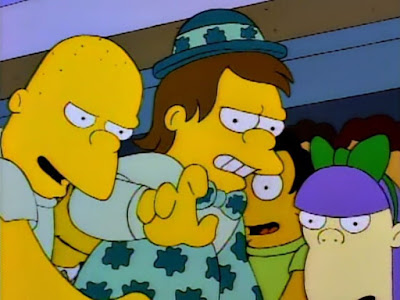 Bart suffers the way kids did in my elementary school when they didn't participate in "the wearin' o' the green." 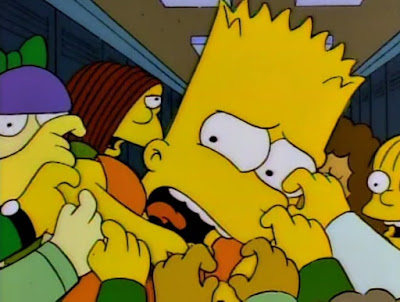 "Homer vs. The Eighteenth Amendment" is a great episodes of one of the best series of all time and is highly recommended for St. Patrick's Day viewing. 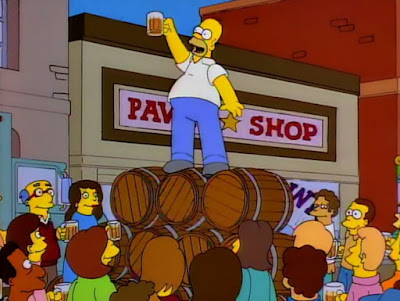 I am a big fan of The Simpsons and this is a great episode.   As J.A. Morris mentions,  the homages to gangster movies are pretty brilliant.   I particularly liked that Moe's Tavern masquerades as a pet shop to shake off the cops and various Springfieldians reaction to the return of Prohibition (collapse seems  to be a popular response). 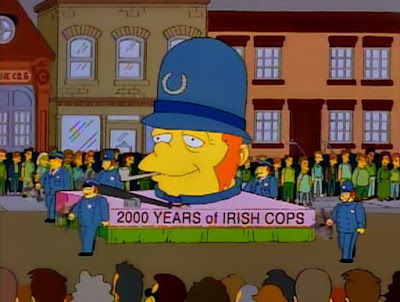 The St. Patrick's Day portion of the episode is also pretty darned funny and really plays with the notion that this is really a holiday for amateur drunkeness with a veneer of Irish heritage.   It's well worth pausing during bits of the parade to see what is going on with each float and in the crowd. 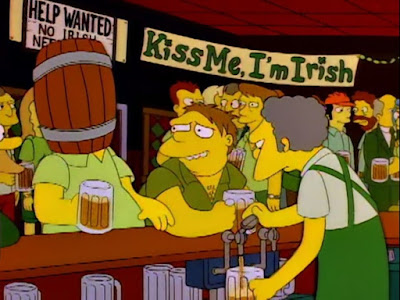 That being said,  I am going to deduct a bit from my rating since the St. Patrick's Day portion really only lasts for the first couple of minutes of the episode!