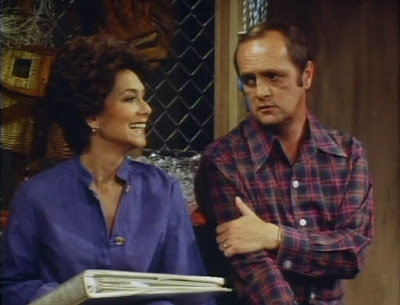 Emily:Howard, Bob and I got railroaded into giving a July 4th party, would like you like to come?
Howard:Oh, great, when is it?

Dr. Bob Hartley (Bob Newhart) is talked into hosting a Bicentennial Party on the 4th of July.  But when Bob and his wife Emily (Suzanne Pleshette) tell their neighbor Howard (Bill Daly) about the party, Howard offers to host the festivities, provided he can borrow all of their party supplies.  Howard suggests a costume party and Emily agrees with that idea.

Emily and Bob go down to their apartment's storage locker to get their punchbowl and card table. Shortly before they exit, Emily accidentally traps them in the locker! 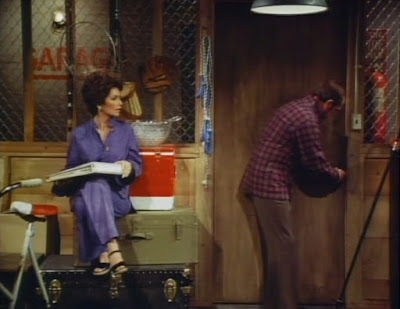 This causes the couple to engage some deep conversations.  Emily asks Bob if he really loves her, and asks if he would re-marry if she died. They ask each other if they wish they'd had children.

Meanwhile, guests begin arriving at Howard's apartment.  Bob's office mate Dr. Jerry Robinson (Peter Bonerz) arrives and is unpleasantly surprised to find that he and Howard have both dressed as Uncle Sam. 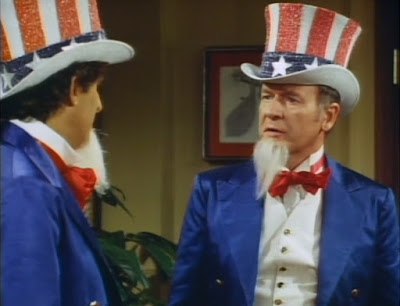 The trend continues when Bob's secretary Carol (Marcia Wallace) and her husband Larry (Will Mackenzie) enter the scene. 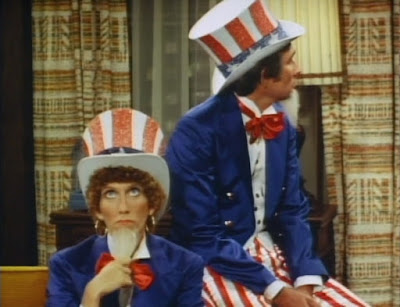 But Bob's regular patient Elliot Carlin shows up dressed a "colonial spy"...sort of.

Howard's party gets off to a rocky start, because everyone is waiting for Bob and Emily to bring the food and other supplies.

Will Bob and Emily escape from the storage locker?  Will Howard's party be ruined without the presence of their punchbowl and card table?

I'll start by saying that America's Bicentennial celebration was a big yearlong event of my childhood. American Flags adorned everything.  There was red, white and blue food, clothing, you name it (I remember owning a tank top that was emblazoned in Stars & Stripes). But we didn't get a lot of specials or episodes that celebrated this country's 200th birthday.  For that matter, there are very few TV episodes that take place on the 4th of July.  That's probably due to fact that historically, only reruns aired during the Summer.

"Caged Fury" is a very good episode of The Bob Newhart Show.  As usual, Bob and Emily are the "normal" people surrounded by crazy and/or dysfunctional friends.  But when they're trapped in the locker, we get to see that they've got issues themselves.

They say some nasty things to each other.  Bob calls Emily a moron, she calls him "flabby" multiple times.  But I get the impression it's just a way to blow off steam in a difficult scenario.

The highlight is Howard's 4th of July party.  We get four Uncle Sams in the same room.  Jack Riley is funny as ever, showing up to the party in his "spy" costume.  Howard is perhaps the worst party host in history. 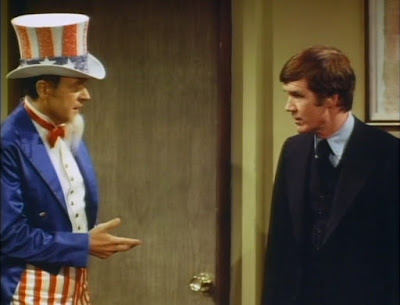 This episode can be found on The Bob Newhart Show:Season 5 dvd set. 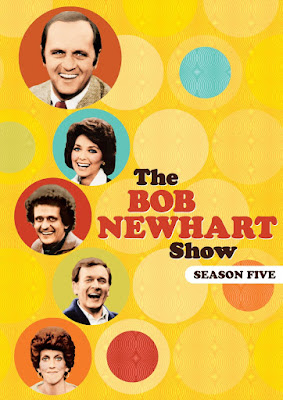 "Caged Fury" is good entertainment for the 4th of July weekend and is recommend.
J.A. Morris' rating:


3 and a half American Flags.

This is an interesting episode of a fun series.   As J.A. Morris says above, there aren't a whole lot of 4th of July themed television episodes to be had, so we should appreciate what is available to us. 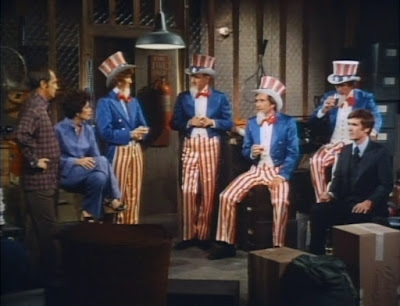 The multiple Uncle Sam costumes make for an excellent sight gag and the "trapped in a closet"  (or storage locker) trope is used to good effect.  Any time that "trapped in the closet" does NOT morph into a clip show is noteworthy -- kudos to The Bob Newhart Show writers for thinking of something a bit different to do with the trope! 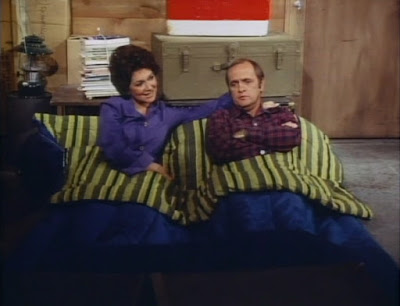 My main issue with the episode stems from some of the unnecessarily mean bickering between Bob and Emily.   Sure, getting stuck in a small space is frustrating,  but Bob and Emily are both intelligent people who love each other.  For example,  I had difficulty buying psychologist Bob calling his wife a "moron" for making a silly mistake.  It seems a bit harsh, and out of character for him.    Fewer kudos to the show's writers for that.

That being said, this episode is well worth your time. 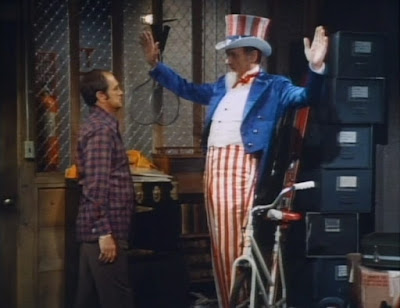