The Crazy Ones: "March Madness"


“Why would I have problem with a holiday that turns this entire town into a drunken frat party?  Where a man can’t walk 3 feet without someone vomiting green beer on his new Tod’s driving mocs. Where you’re asked to kiss someone based on their ethnicity.  Which is racist.”
-Simon Roberts on his dislike of St. Patrick's Day

It's St. Patrick's Day at the ad firm of Lewis, Roberts & Roberts, and art director Andrew Keneally (Hamish Linklater) is designing the company's charity float for the St. Patrick's Day parade.  His boss, Sydney Roberts (Sarah Michelle Gellar) tells Andrew and the rest of the staff that they are forbidden from mentioning St. Patrick's Day.  Her father (and their boss) Simon Roberts (Robin Williams) is a recovering alcoholic and now hates the holiday.

That goes out the window when Andrew's six boisterous grade school teacher sisters arrive.  L,R&R's offices are on the parade route so they plan to celebrate "St. Patrick's week" by hanging around the office, getting drunk and staking out their parade post...for two days prior to the parade.  Surprisingly, Simon agrees to let them stay, despite Andrew's objections.

Meanwhile, Krispy Kreme is auditioning actresses for its next commercial produced by the agency.  Their guy isn't happy with anyone until Sydney and Simon's assistant, Lauren (Amanda Setton) find themselves unexpectedly in competition to be the next Krispy Kreme spokeswoman. 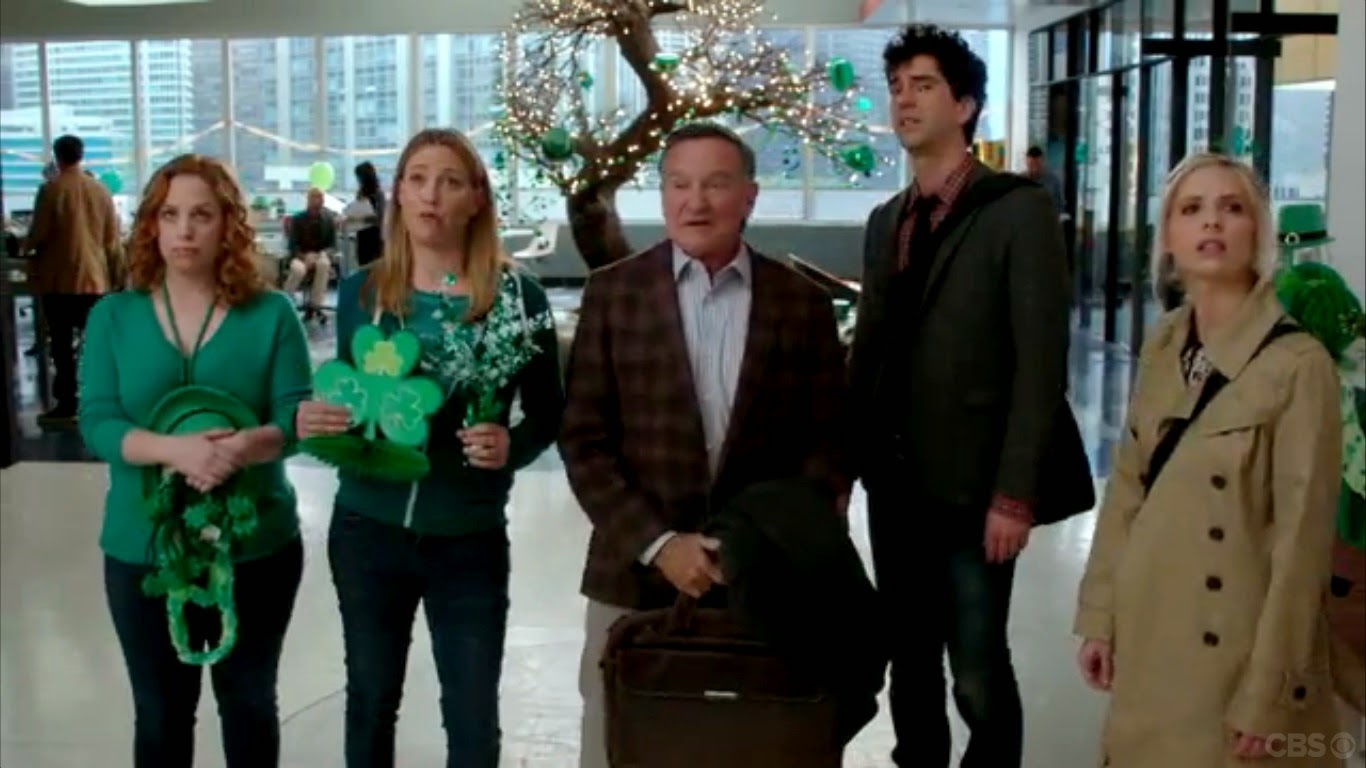 The Keneally sisters have a somewhat negative impact on the office.  Molly gropes Simon for not wearing green.  Katherine (Jamie Denbo) and Elaine (Jessica Chaffin) seem determined to get everyone drunk.

Cute copy writer Zach Cropper (James Wolk) says he'll take them out drinking after work, mostly to get them out of Simon's hair.  This turns out to be an issue the next day.

Zach wakes up extremely hungover, with an injured eye and an elaborately painted face courtesy of the Keneally sisters.

He's in no condition to do his job, which is unfortunate as he is part of an important client meeting which goes badly.

On top of this, the sisters have taken Simon's giant Rock 'em  Sock 'em Robot outside and adorned it with shamrocks.

This is a bridge too far for Simon.  He orders all of the St. Patrick's Day paraphernalia removed from the premises.

The St. Patrick's Day charity float for the parade gets caught up in the shuffle and trashed,  which could spell PR disaster and unhappy children on St. Patty's Day.

Will Simon be able to overcome his St. Patrick's grinch-ness and save the day?  Or will he stick a shillelagh somewhere the sun doesn't shine?

This may well be the St. Patrick's Day-est television episode I have ever seen.  There's plenty of green and plenty of drunken hijinks.  It's quite enjoyable for the most part.  We see the raucous side of the holiday in full force. 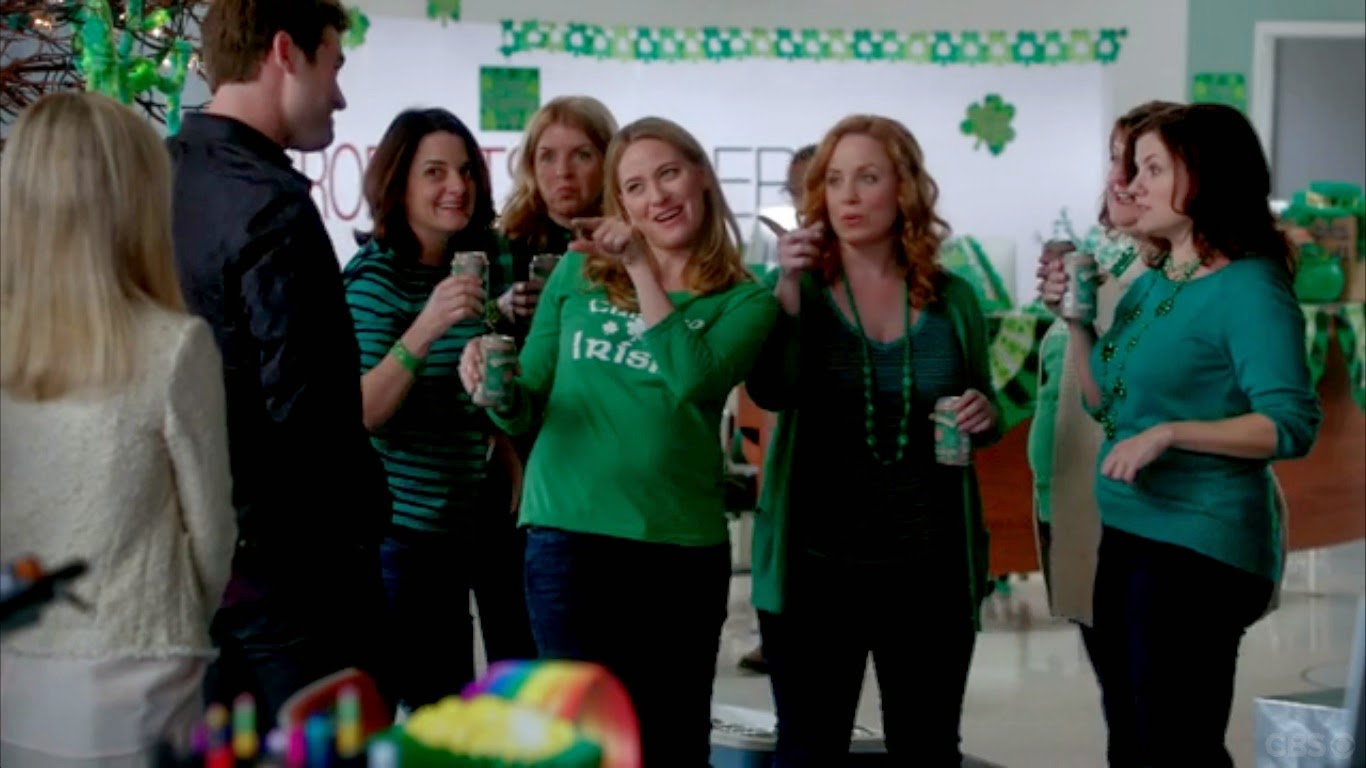 The Keneally sisters are pretty darned funny and their interactions with the various members of the ad firm really enhance the show's energy.   I also love that hard-partying,  off-duty grade school teachers help save the day in this episode.

I also like the Grinch-y/Scrooge-y thing that happens with Simon during the course of this episode. It's nice that he is able to find his St. Patrick's Day spirit.

The resolution of the episode is sweet and funny and manages to tie everything that went before it together very nicely.
My only real complaint is a problem I have with the series in general, an over-reliance on product placement. In this episode, it was Krispy Kreme, but I can think of many other examples from earlier episodes.  (As an aside, this also bugs me about Mad Men - which is also about an ad agency and also features James Wolk.)

Still the comedy and fun of this particular episode make it one of my favorites in the series.  It's one I'd definitely recommend checking out.   You can catch it online (at CBS.com) or on demand at the moment.

3 and a half shamrocks

J.A. Morris says:
I can't add much to what my co-blogger said.  If I have any problems with "March Madness" it's the same problem I've had with every episode of this series.  It has One too many "random" for the sake of being random jokes or "weird" statements that are supposed to be funny, but fall flat.

But this is the best episode of The Crazy Ones.  There aren't many St. Patrick's Day episodes (compared to Christmas & Halloween) and this will probably be one I watch in the future around March 17.

The Keneally sisters are the highlight of this episode, and if they had their own show, I'd watch it!  The entire ensemble is pretty good here too.  Robin Williams is restrained (well, as restrained as he can ever be!) and Sarah Michelle Gellar is a good "straight man." 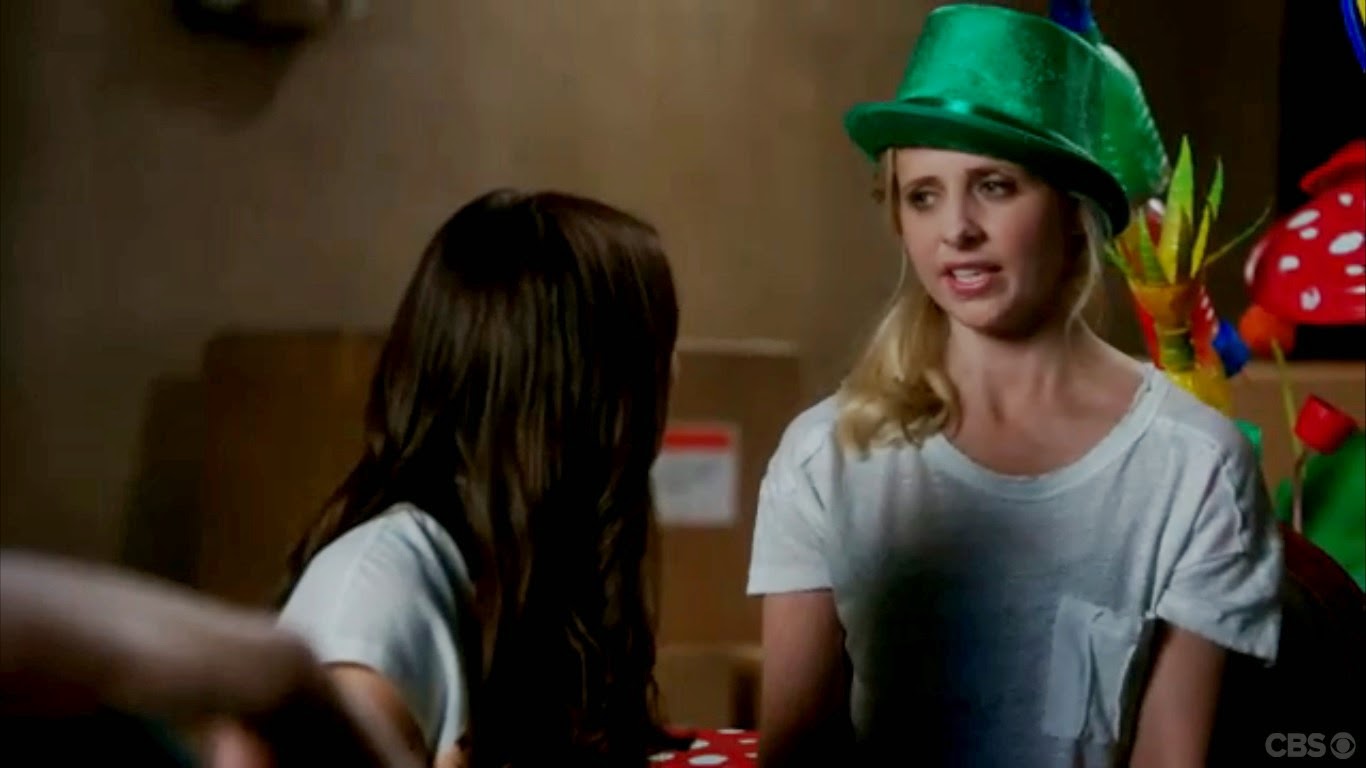 All in all it's a lot of fun with plenty of seasonal trappings.

3 and a half shamrocks