The Easter Bunny Is Coming To Town 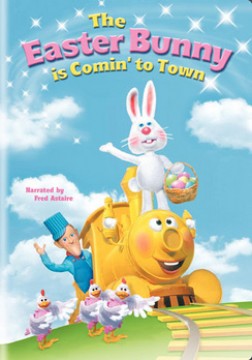 The Easter Bunny is comin to town today

Here's hopin' he's hippity-hoppin' your way
So get your brushes and paints, give him a hand
It's Easter throughout all the land!
-S.D. Kluger, in his introductory song.

Mailman Special Delivery "S.D." Kluger (Fred Astaire, reprising his roll from Santa Claus Is Comin' To Town) answers letters sent from children about the Easter Bunny. They want to know "Where does the Easter Bunny come from?", "Why do we color eggs at Easter?", "Why are Easter flowers called lillies?", "Who made the first chocolate bunny?". It turns out S.D. is an old friend of the Easter Bunny, so he tells a story that will answer the kids' inquiries.

The story opens in a town called Kidville, its population was made up entirely of orphaned children. S.D. was a child-mailman in Kidville. It was cut off from the rest of the world by Big Rock Mountain. Life in Kidville was peaceful, except for one thing: a bear named Gadzooks (Allen Swift) would occasionally interrupt the children's celebration of holidays and birthdays. 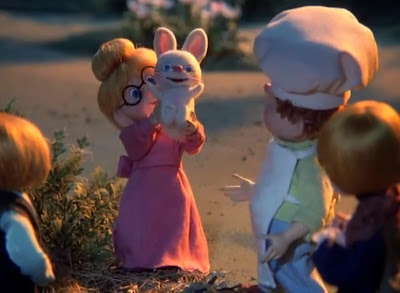 One Easter morning, the kids find a baby bunny (Skip Hinnant) who is also an orphan. They decide to name him Sunny. He grows up (rabbits mature faster than children) and quickly becomes a leader in Kidville.

Sunny says they need to share the things they make with the outside world. He sets out to sell hard boiled eggs, but doesn't know where to go. Sunny encounters a hobo named Hallelujah Jones (Swift again), who directs him to a town called...Town.


On the way to Town, Sunny is chased by Gadzooks, who wants Sunny's eggs. Sunny escapes and arrives in Town, and learns that there are no children in Town, when babies are born their parents are forced to leave with them.  It is a very dark and depressing community.

The only kid in Town is seven year-old King Bruce The Frail (James Spies). Bruce is very lonely, he doesn't want to be king, he longs to be "just an ordinary kid". He is pushed around by his Aunt Lily Longtooth (Meg Sargent), the real power behind the throne. Lily orders Bruce to eat his beans, which seems to be the only food  ever served in Town. Sunny observes this and is determined to bring cheer to Town, and to Bruce's life.

Hallelujah suggests that Sunny color the eggs so that Gadzooks won't know they're eggs. The plan works (he tells Gadzooks the eggs are "colored stones") and Sunny runs to Town.

The people love the eggs, especially Bruce (he's thrilled to eat something other than beans), who christens Sunny "The Easter Bunny, Royal Knight Of The Easter Eggs."

But Lilly puts a stop to this, forcing Bruce to declare eggs illegal.  She sends Bruce to bed without dinner.

Next Easter, Sunny devises a way to get around the "no food but beans" rule.  With the help of Hallelujah and Herbert the baker, Sunny invents jelly beans.

They are a hit with the people of Town.  This enrages Lilly and she tells her soldiers to use any means necessary to stop Sunny.

I remember when The Easter Bunny Is Coming To Town first aired.  It was a regular part of network Easter programming for several years in the 70s and 80s.  I've always enjoyed it.


Sunny is a likeable champion who fights for a just cause.  And he's very cute too, especially as a baby.  This is the 2nd Rankin-Bass special that tells the "origin" of the Easter Bunny, following The First Easter Rabbit.


The main problem with this special is that it's very derivative of other Rankin-Bass offerings.  It's a sequel to Santa Claus Is Comin' To Town and borrows much of its story.  It also owes a lot too Rudolph The Red Nosed Reindeer too.  Gadzooks is sort of a combination of the Bumble and the Winter Warlock, just like them he is ultimately reformed.  But Gadzooks looks very amusing in his "Easter Outfit".  Lilly seems to be channeling the Burgermeister Meisterburger.


The songs by Maury Laws aren't as good as the ones featured in earlier specials like Rudolph, but they're mostly nice and help move the story along.  I've had several of the songs stuck in my head for days, ever since I re-watched the special.  "Someone's Gotta Take A Taste" is the strongest song of the bunch.

Unlike other specials of the era, it doesn't feature many famous voice actors (with the obvious exception of Astaire's narration).  But Sunny is voiced by Skip Hinnant.  If that name doesn't ring a bell, you might remember Hinnant from his time as cast member on The Electric Company, where he played Fargo North, Decoder (among other characters).  Hinnant does a great job in this special, his voice is perfect for the Easter Bunny.


I'm not sure how often this special airs on TV these days, but it's available on DVD and is worth seeking out

The Easter Bunny Is Coming To Town is a solid special that features a likeable protagonist, and an entertaining origin story but it's derivative aspects prevent me from giving it our highest rating:

This particular special was not one that I saw until a couple of years ago.   As J.A. Morris says, it does suffer  from feeling a bit too much like other, better Rankin-Bass offerings.    Sadly, the songs are not particularly memorable and I find the "Which came first the chicken or the egg song" to be a bit ontologically troubling. This is a cute enough special,  but definitely not a great one, in my opinion.